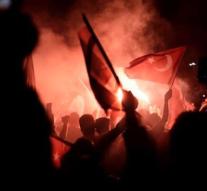 - Shortly after the failed coup in Turkey have put nearly 9,000 officers from their duties by the Ministry of Internal Affairs, including thirty of the 81 provincial governors that counts the country.

The newspaper Hurriyet reported on Monday that the Ministry has removed 8777 people from their posts, including more than 7,900 police officers. They have to surrender themselves to report in the night from Sunday to Monday in the headquarters of the police and their weapons.

Among soldiers and magistrates were already more than 6,000 people put out their duties. In the attempted military coup are Friday and Saturday 290 people died.