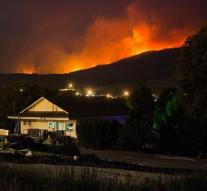 british columbia - Thousands of residents of the Canadian province of British Columbia have fled to fierce forest fires. The state of emergency has been announced. No one was injured for the time being.

According to Reuters, two hospitals and a regional airport have already been closed. The forest fires are fueled by the dry, warm weather and lightning. The authorities therefore think that the fire will expand further.

One of the biggest fires is near the town of Ashcroft, about 200 kilometers northwest of Vancouver. The fire expanded there in a short time to an area of ​​4,000 hectares.