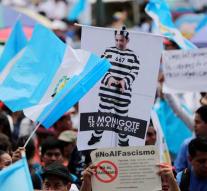 guatemala city - Thousands of demonstrators in Guatemala have demanded the departure of President Jimmy Morales on Thursday. Students, professors and activists gathered in the historic center of Guatemala City and supported the fight against corruption and impunity, as former Interior Minister Francisco Rivas said on Twitter with a photo of him in the crowd.

The reason for the demonstration is the decision of President Morales to deny the Commissioner against Corruption and Impunity in Guatemala (Cicig) of the United Nations, Iván Velásquez, access to the country. The Constitutional Court of Guatemala had declared on Sunday that Morales should allow the commissioner. The government does not want to do that, however, and the president decided that the mandate of the UN committee is not renewed.

The UN Commissioner had demanded in mid-August that the immunity of the President be lifted so that a case can be started against him for illegal campaign financing.