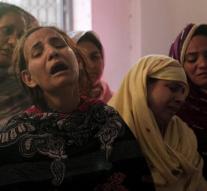 - Pakistan has arrested more than 5,000 people after the suicide bombing Sunday in Lahore, leaving at least 70 people were killed. Of those arrested are still 216 firm, says a minister of the state of Punjab. The rest is released.

Authorities in Pakistan started Monday a paramilitary operation in the Punjab in response to the attack. In addition, the government has special powers given to the military in the fight against Islamic extremists.