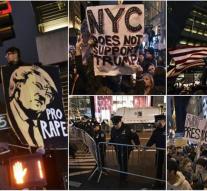 - Thousands of Americans have taken to the streets in the night from Wednesday to Thursday to protest against the election of Donald Trump as the new president of the United States.

New York went on Wednesday evening (local time) in the Manhattan borough of thousands of demonstrators on the road, also in the city, hundreds of people together in a park while the slogan 'not my president' chanted. In Chicago, thousands of people came together at the Trump International Hotel and Tower, while they shouted slogans like 'No Trump! No KKK! No racist USA. 'Police closed several roads, so that the protesters could not continue.

There are also protests planned in Boston, Detroit and Philadelphia.