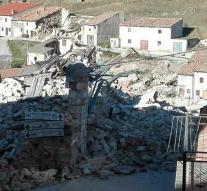 rome - Fifteen thousand Italians have been left homeless by the earthquake on Sunday. This was announced by the Italian Civil Protection. The quake with a magnitude of 6.6 demanded to all appearances no lives, twenty people were injured.

The quake occurred in the same area last week was hit by several earthquakes. Many of the houses and other buildings that had now collapsed already weakened by previous earthquakes. The Italian government on Monday convened in emergency session to discuss the reconstruction.

Many people are taken care of by family or friends, but civil defense has provided so far are 15. 000 people help. Of these, 10 000 people accommodated in tents or gymnasiums, the BBC writes.

In August, has also been affected the same part of central Italy, when a quake with a magnitude of 6.2. Nearly three hundred people died.