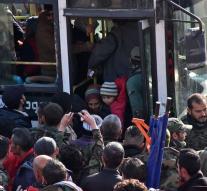 aleppo - So far Monday evacuated about 5,000 people with 75 buses from the Syrian city of Aleppo. Another 25 buses are ready to get more people from the city. That has reported the Red Cross.

Monday was the first convoy of evacuees from eastern Aleppo safely in Rashi al-Deen, the area where the Syrian rebels fighting the Assad government to have a say. Then more followed.

Thousands waited in the east of Aleppo still on transport, according to the Red Cross. It's hard to say how long the evacuations still going to last. The evacuation of the controlled parts of Aleppo by the rebels began last Thursday, but Friday was interrupted for several days. In total now reached approximately fifteen thousand people from the city.