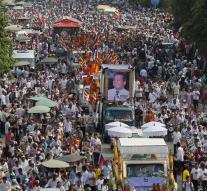 - Thousands of people are in the Cambodian capital Phnom Penh to the streets went to the funeral of an opponent of the government who was killed earlier this month.

The 46-year-old activist Kem Ley was shot dead in a shop in Phnom Penh on July 10.

According to the police, which lasted for a suspect, a debt of money was the motive for the murder. But opponents of the government think that to his death with his political views and activities.


In photographs showed a large procession behind the coffin with the body of the murdered activist. According to eyewitnesses, the flow of mourners was probably eight kilometers long and were also thousands of people along the way.