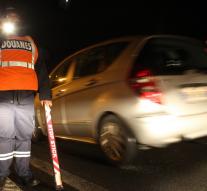 - The French authorities almost a thousand people have refused entry to France since the tightening of border controls in response to the attacks in Paris. That the French Interior Minister Bernard Cazeneuve said Saturday, reports the French news channel BFM TV.

These are people who are " pose a threat to public order and safety ", said Cazeneuve during a visit to Strasbourg.