Home / World / This year there are seven terror attacks in Europe 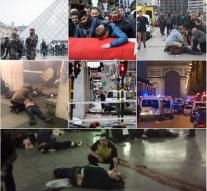 manchester - The attack on a concert hall Monday in Manchester was the seventh terrorist attack in Europe this year. An overview:

ISTANBUL: At the start of the new year 2017, a man opens fire to visitors to a busy nightclub on the western bank of the Bosphorus. The perpetrator from Uzbekistan kills 39 people. He would have ties with the Sun's extremist extremists.

PARIS: On February 3, a man near the museum crosses the Louvre patrol soldiers with a sting weapon. He is shot down. The 29-year-old Egyptian perpetrator called 'Allahu Akbar' when he was the military parade. He would have ties with IS.

LONDON: On the first anniversary of the Bloody Attacks in Brussels in 2016, on March 22, a 52-year-old Brit will enter a pedestrian bridge on the Thames near the British Parliament building. There he hits a fence and dies an agent. He kills a total of five people before being shot himself. Over forty people get injured. IS is responsible.

SINT-PETERSBURG: On the metro in the center of Saint Petersburg, April 3 is a bombing. The Russian perpetrator was an ethnic Uzbek that blamed at the attack. There are fifteen deaths and about 45 injured. The perpetrator would have had Islamic extremist motives.

STOCKHOLM: A 39-year-old Uzbek, who sympathizes with extremists like those of IS, drives a stolen truck on people on April 7 in a busy shopping street in Stockholm. The truck comes to a halt in the store of a store. At the attack five deaths and about fifteen injured.

PARIS: A 39-year-old French criminal opens the fire on agents in a car and bystanders on April 20 at the Champs Elysées. An agent is killed and two people got injured. The perpetrator is shot dead. The attack was claimed by IS and the French authorities regard it as a terrorist attack.

MANCHESTER: At a suicide attack in a concert hall at the end of a pop concert of singer Ariana Grande, 22 were killed and nearly 60 injured.