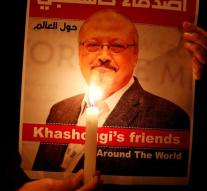 brussels - In 2018, 94 journalists and people with whom they worked together were killed by violence. That is twelve more than last year, according to the International Federation of Journalists (IFJ)....

Most of the deaths were in Afghanistan. There, 16 journalists and other media employees died. Mexico follows with 11 victims. Four journalists have been killed in Europe. That was in France, Bulgaria, Turkey and Slovakia.

The low point this year was the murder of the Saudi journalist Jamal Khashoggi. He was murdered in October at the Saudi consulate in Istanbul.