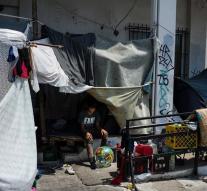 geneva - Since the beginning of the year, many more people died on the flight than the same period in 2015 alone on the routes across the Mediterranean registered to the International Organization for Migration (IOM) 3120 killed refugees.

Worldwide there are this year 4027 people died in different routes. That's an increase of 26 percent compared to 2015, said IOM spokesman Joel Mann Mill Tuesday in Geneva.

The most dangerous route, according to the IOM crossing from the Libyan coast to Europe. In recent days still beached near the Libyan city Sabrata 120 refugees drowned. On the Mediterranean routes were three-quarters of all deaths among migrants, the IOM reported. Last year it was 60 percent share.


Since the escape routes are largely completed along the Balkan route, are much less people from Turkey through Greece to Europe. At the same time try more refugees from North Africa to Europe.