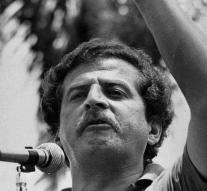 bogota - A former general of the Colombian police sentenced to thirty years in prison for his involvement in the assassination of presidential candidate Luis Carlos Galán. Political assassination is almost as long ago as the height of the jail: Galán was shot dead in 1989 in front of thousands of people.

General Miguel Maza Marquez contributed to the murder by deliberately reduce the security of the politician. The murder was probably committed on behalf of drug lord Pablo Escobar. Which had met in Galán, because the politician called for a crackdown on the drug cartels and people like Escobar wanted to extradite to the United States.

Escobar's former hitman John Jairo Velásquez, also known as Popeye, was convicted in 1992 for his involvement. He was thirty years, but in 2014 he was released early. The conspiracy was also a party member and rival Galán.

Escobar himself died in 1993 by police bullets.