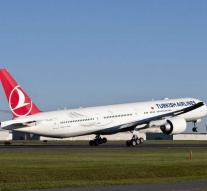 new york - At least thirty Turkish Airlines air passengers were injured when the Boeing 777 in which they were at New York ended up in heavy weather.

Three quarters of an hour before landing at JFK Airport, the aircraft was subjected to severe turbulence. Thirty passengers came out of the aircraft with their fur and blue. A number of them also suffered lacerations. None of the passengers were seriously injured. The relief was great on arrival at JFK. Certainly one person had to be removed from the device by stretcher. All passengers were examined in a hospital.

The aircraft had departed more than 10 hours earlier from the Turkish metropolis Istanbul.