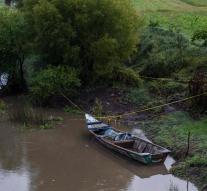 - In the Mexican province of Jalisco in Chapala found the bodies of thirteen people. The local prosecutor has against Mexican media said that it refers to members of a drug gang. That would have killed a dozen days ago by their former allies from the neighboring state of Michoacan.

The bodies of twelve men and one woman were probably thrown into a river that flows back into the largest lake in Mexico. Saturday a soldier was also shot dead in the province of Guanajuato in a shootout with criminals. One day, five soldiers were killed earlier when they were ambushed in the province of Sinaloa.