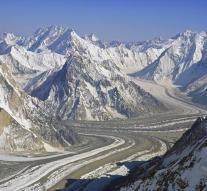 utrecht - Even if the agreements in the Paris climate agreement are met and global warming is limited to 1.5 degrees Celsius, more than a third of glaciers will be melted in Asia by the end of this century. It is to be feared that there will be more, according to a study by the University of Utrecht, published in Nature on Thursday.

The disappearance of Asian ice, due to its enormous size, is still the 'Third Pool', is worrying because millions of people in the region depend to a large extent on the melting water. The impact of a 1.5 degree rise in temperature is especially funest for glaciers in the Himalayas and Tibet. According to Utrecht scientists around 2100, half will be melted because the higher regions warm up faster than the global average.