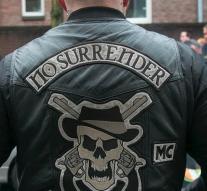 rotterdam - A member of motor club No Surrender was arrested in a Rotterdam prison on Tuesday on suspicion of abuses and abduction of a club mate in Breda. The 34-year-old Rotterdammer was already in charge of the heavy abuse of another former member of the motorcycle club.

The abuse in the parking lot at IKEA in Breda was broadcasted earlier this month in the Detective Program Bureau Brabant. A 26-year-old man from The Hague reported to the police after the broadcast. There are now three members of No Surrender. A 30-year-old man from Hulst was arrested at Schiphol.

The police are still looking for a fourth member, who may be in Rotterdam or in the Zeeland village of Axel. The police investigation team calls on him to report.