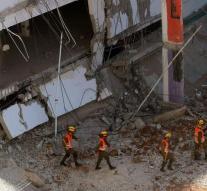 - The death toll from the collapse of an underground car park in Tel Aviv on Tuesday rose to three. How many people may still lie under the rubble, according to a spokesman of the rescue not clear. was spoken previously of five missing.

There were thirty wounded, including several Palestinians, according to the newspaper Haaretz. Hundreds of members of special army units are still looking for more victims. The four-storey building project was almost completed when it collapsed by still unknown causes. The environment will remain deposited.