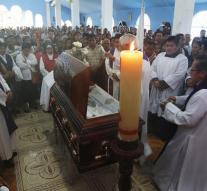 Puruandiro (Reuters)- A Roman Catholic priest who was kidnapped in Mexico last week was found dead Saturday. It is the third priest in a week's time who was murdered in the Central American country, the BBC reports.

The body of Jose Alfredo Lopez Guillen was found near the Puruandiro village in the western state of Michoacán. He was a few days earlier shot dead according to prosecutors.

On the day Lopez Guillen was kidnapped, the bodies of two other priests were found in Veracruz on the east coast. They are also killed by a bullet. The two previous murders appear to have no connection with the death of Lopez Guillen.