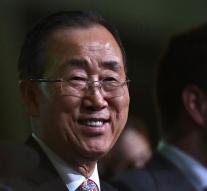 - The United Nations Security Council holds Monday the third ballot on the succession of Secretary-General Ban Ki-moon. notify the members of the board on each of the remaining eleven candidates whether they 'encourage' his candidacy, 'discourage' or have no opinion about it. It is then to the candidates themselves to draw any conclusions from the amount of support they have received.

Six men and five women on the highest diplomatic position in the world. Ban Ki-moon has previously indicated that what he regards time for a woman at the helm after the country organization seventy years has been led by men.


The new secretary general in January to enter.