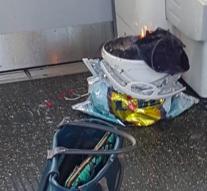 newport - The British police arrested a third person because of the attack at London's Parsons Green station. This happened according to the newspaper The Independent at an address in Newport (Wales). The police are also looking for a home.

The police arrested two other suspects after the partially failed explosion in a metro train, which had just stopped at the station. At the attack, thirty people were injured on Friday.