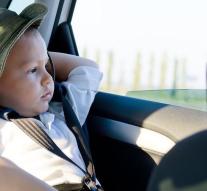 london - A thief is in England ran off with a car in the back seat a baby of 11 months. The boy was later found unharmed on the doorstep of a home in north London, not far from the spot where the car disappeared.

The thief hit Saturday afternoon to after the 27-year-old mother had parked the car and was out of it. Besides the baby, was also a 12-year-old daughter in the car. Who jumped from the car just before the thief gave gas. The car was later abandoned and recovered undamaged.