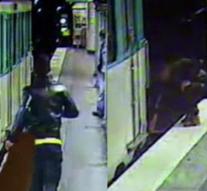 - A pickpocket who saw an easy target in a drunk man sleeping in the subway in Paris, later proved a savior for his victim.

Surveillance video of the incident this week were shown on the French channel France 5. The video shows how the thief empties the pockets of the sleeping man. He creates a mobile phone booty.Not long after awakened the drunken man and he stands up. He is obviously quite under the influence because he staggers towards the railway and falls off the platform. Another bystander who saw the whole thing, running away when a train arrives.

At that moment the thief back into action. He runs along the train to reach the man and jumps on the track to help him on the platform. Miraculously get both uninjured. Policewoman Emmanuelle Oster, who discusses the images in the documentary speaks of the paradox of the "good" thief. " In every thief lurks a good man, and every innocent bystander may be an asshole. " It is not known if the pickpocket is prosecuted for theft.