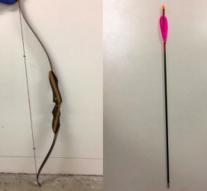 sydney - The Australian police are looking for a burglar with a striking injury. An angry homeowner fired a criminal during an attempted escape down with bow and arrow, reports the BBC Monday.

The intruder had sun money, car keys and other belongings stolen from a house in Sydney. The 68-year-old resident caught the thief, who at the time was trying to steal a car. The criminal then ran off and jumped over a fence.

The angry Australian had armed with a bow and shot the fleeing criminal arrow in the buttocks. However, the man managed to reach a getaway car and driving away. It is still unclear how severe his injuries.