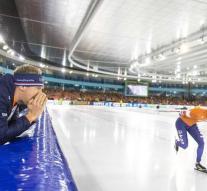 heerenveen - Thialf has developed an app for skating coaches in cooperation with the KNSB and Sportunity. They do not have to stop with a stopwatch next to the ice skating rink. The Sprint Coach app gives real-time skating speed to twelve times a round.

Thialf is the first ice stadium with twelve measuring loops in the ice. The coach can see the results of all drivers on a tablet and indicate which distances he wants to analyze. After a click, the coach gets information about the speeds on each part of the track.

The innovation will be presented this summer as a pilot to the commercial teams operating in Thialf. At present, eleven teams make use of the app and the summer ice cream in the hall. 'The coaches and drivers are already very excited and we get relevant feedback that we can take for the release in September,' said Roy Mulder of the KNSB about the pilot's phase of the app.