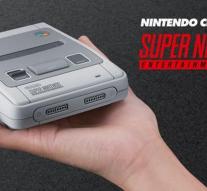 - The miniature version of the Super Nintendo (SNES) comes to Europe on September 29th. With 21 classic games including a sequel to Star Fox.

With the Nintendo Classic Mini, users can return to the 1990s to play timeless classics. The system can be connected to HD TVs, via an HDMI cable.

On the 'mini', the game Star Fox 2, which was never released, is now being played. A sequel to the popular Star Fox game, released in Europe under the name Starwing.

'Players must prove their skills by completing the first level of the original Star Fox to release Star Fox 2,' Nintendo reports.

These 21 games can be played on the Classic Mini:

The original Super Nintendo was released in Japan in 1990 and two years later in Europe. The 16-bit game machine competed with the Sega Mega Drive and was the successor of the Nintendo Entertainment System (NES), which was introduced worldwide between 1983 and 1987, which was 8-bit.