Home / World / 'Theresa May has been dropped off within ten days' 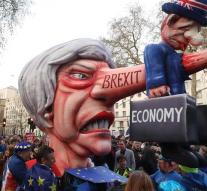 london - Eleven ministers in the British cabinet want Prime Minister Theresa May to resign immediately. That is what Sunday Times parliamentary reporter Tim Shipman, who has spoken with the eleven, said.

According to Shipman, the entire cabinet supports the decision to dismiss May. 'The end is near, it left within ten days,' one of the ministers would have said to him. The ministers want to install an interim prime minister in their place. David Lidington, Michael Glove (Minister of the Environment) and Jeremy Hunt (Minister of Foreign Affairs) are mentioned as possible candidates.