Home / World / 'There are millions needed for Schiphol' 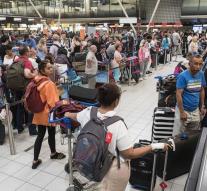 schiphol - At least 75 million euros a year should be invested extra in Schiphol to avoid hours of waiting. That says financial aviation experts. 'Not only to more staff for security and passport controls, but also for more space and new technologies, such as 3D scans.'

On Friday, it was pretty good at Schiphol (220,000 travelers) because 'all hens were on deck'. 'That has to be continued, otherwise we will have a passenger injuries,' warn unions and airlines.

Schiphol and KLM did not yet give concrete figures before the new measures for the summer season were evaluated. Passengers are caught in 'peaks and falls'.