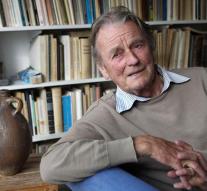 - In his hometown of Amstelveen, Friday theologian and ethicist Harry Kuitert died after a short sick bed. That has let his daughter know Sunday. Kuitert was especially influential in the Protestant churches in the sixties and seventies, and was the cradle of the PKN, the Protestant Church of the Netherlands.

Harminus Martinus Kuitert (1924) has a lot of publications on his name, with probably the most famous 'The General Doubt of Christian Faith' (1992). He was far ahead with publications in the 1980s about suicide, such as 'Suicide: What is it? Self-sufficiency in moral perspective 'and' A desirable death. Euthanasia as a moral and religious problem '.

He eventually wrote as the theologian who questioned the Bible and God. Through pronouncements like 'All speaking above, comes from below,' he made himself less popular with orthodox believers. That it is man who determines what is being said about God did not fall in good faith in many believers too. In a period of thirty years Kuitert was also Professor of Ethics and Dogmatics at the Amsterdam Free University.

Almost a year ago, a biography entitled 'Speaking over above' appeared by Gert Peelen and author Petra Pronk.

The funeral is Thursday at Zorgvlied Cemetery in Amsterdam.