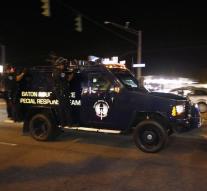 - Agents in Baton Rouge (Louisiana), three suspects were arrested Saturday which weapons have been stolen for use against suspected agents. This was announced by the American police Tuesday.

According to local police said a suspect, who had a fire and air weapon in his pocket during his arrest, that they wanted to use the weapons against the police. Saturdays were stolen during a burglary at a pawnshop eight weapons. Six of them are found again.

Police have arrested three people, a fourth suspect is still at large. One of the suspects was thirteen years old, police says.


Tempers Baton Rouge are heated due to the death by police bullets of two black Americans in Baton Rouge and in Minneapolis (Minnesota). This weekend dozens of protesters were arrested during protests.