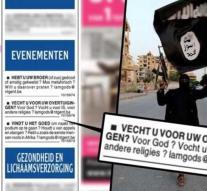 ghent - A theater looks for IS terrorists through a newspaper advertisement and offers them a job as an actor.

For the theater production 'Lam Gods', artistic director Milo Rau wants to have returned Syrian gangs. He finds his production 'a modern version of the crusaders'.

Rau wants to transform the famous painting Lam Gods of the Van Eyck brothers into a play about the Ghent society of today.

Production leader Annabel Heyse in Het Nieuwsblad: 'In our modern, super-diverse society the concept of crusader must of course be opened. NTGent therefore searches for 'convinced believers'. And she takes that very wide. 'You fight for your beliefs? You have fought for IS? ', Says the ad.

NTGent backs up a bit after the commotion. 'I do not want to say that we are actively recruiting IS fighters,' says Tom De Clercq, spokesman for NTGent. 'But if such a story fits in the performance, we certainly do not exclude it. '

The opposition in Ghent is furious about the plan. 'Returning Syria fighters do not belong on stage but in prison,' says N-VA list leader Anneleen Van Bossuyt on Twitter.