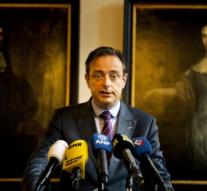 antwerp - The mayor of Antwerp, Bart De Wever, is the only candidate for the presidency of the New Flemish Alliance. That has announced the Liberal Conservative and Flemish Nationalist Party on Saturday afternoon. During the party council on November 18, it becomes clear whether the presiding presidency may begin as its N-VA leader on its fifth term.

The Wever recently announced that he wanted to remain president to lead the N-VA to success in the 2018 and 2019 elections. According to the party dates, a new headman should be appointed after two terms. This may be deviated with a two-thirds majority of the party council.

The deadline for nomination ended on Friday night. Besides The Wever, no one reported. All party members can express their support or abstain from voting in the period between 6 and 13 November, written or electronically via the V-NA website.