Home / World / The victims of Grenfell 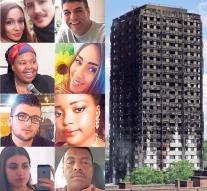 london - The upper floors of the black-skinned skeleton of this week's completely burned Grenfell Tower in London are still unacceptable. There are the remains of dozens of residents who were unable to leave the apartment on time. Through mobile phones and social media, their death struggle is sometimes a crying proximity. But actually every floor of the tower surface tells its own story. A grasp of the stories of the approximately six hundred residents of a residential tower whose most horrible nightmare became reality.

'Thank you mama for everything you've done for me.' These are the last words of the 27-year-old Gloria Trevisan. The Italian architect has lived together with her friend in the Grenfell Tower for three months. She placed many pictures of the 'spectacular' view of London at Instagram. Her friend Marco Gottardi spoke to his family at four in the morning. He saw the flames approaching. That was the last message.

Shekeb Neda, a 24-year-old student, wears a muscular-suffering mother on his back down. He is in the hospital, his mother is in coma. The father (in the picture), a taxi driver, is missing. The family is from Afghanistan.

Here lives the 24-year-old artist Khadija Saye. She is a girlfriend of David Lammy's wife, who is in front of Labor in the House of Commons. On Twitter, Lammy calls her a beautiful young woman. He demands that arrests follow soon after this drama.

The 10-year-old Malek has several hospital beds away from her 6-year-old sister Tazmin. Nursing staff only notice Thursday that the two girls are family. They survived the disaster. Father Omar Belkjadi and mother Farah Hamdan (shown in the picture) are missing, just like their six-month-old daughter Leena.

The 27-year-old Meriam Elghwahry is missing. She is a knowledge of singer Rita Ora. At half past three at night, something from Meriam is heard. Rita Ora is a volunteer on Thursday. She comes out of the neighborhood and has played in the flat as a child.

23-year-old Mohammed Alhajali (pictured) is the first victim identified. He came to London three years ago from Syria. The student road and water construction lived with his brother Omar in the flat. According to Omar, they had seen a lot of misery in their native country, but nothing that was comparable to the ravage during the fire.

The 23-year-old Zainab Dean and her 2-year-old son Jeremiah are probably the victims. Zainab is around the clock at four o'clock with a fireman outside the building. This asks where she is right and passes this information to his colleagues. The fireman uses the phone of the brother of Zainab. The fireman tries to reassure Zainab, but the situation is critical. 'Tell her you love her,' says the fireman to the brother when he returns him his phone. The connection is already broken.

The 16-year-old Ines Alves is learning a chemistry trial when her father comes home from work at one o'clock at night. This one has seen smoke on the fourth floor and tells his children to leave the flat. Ines takes her phone and her notes. She tries to study further, but decides to go to sleep with friends. The school says that she can take the exam later. Ines says not to have learned so hard for nothing and does the exam. That went well, let a brother know.

Bahailu Kebede lives on the fourth floor. His exploded refrigerator is the probable cause of the fire. He calls the emergency line. The fire department is warned. He picks up a bag of clothes and warns his neighbors. The police advises not to tell him about his experiences, reports The Sun.