Home / World / The Supreme Court issues a ban on entry 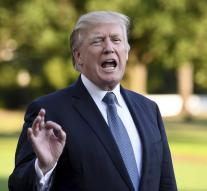 washington - The US Supreme Court is not handling the appeal against President Donald Trump's ban on entry for the time being. On October 10, a meeting was scheduled to hear the arguments of the parties involved. She has been asked to make a new decision now that the government has come up with a modified third version.

The temporary entry ban concerned residents of the major Islamic countries Iran, Sudan, Yemen, Syria, Libya and Somalia. Trump then came with further restrictions to counter terrorism in the US. In the future, visitors from North Korea and Chad can also forget a visa for the US.

The same is true for Iran, with the exception of students and participants in exchange programs who, after extensive screening, may enter the US. Venezuela also had restrictions. Certain government officials and their relatives will be rejected.

Experts think that Trump is now more difficult to deal with legally, because a lot of experience has now been gained with screening research. He can no longer be accused of discriminating against Muslims alone.