Home / World / The Spanish government wants to dig up Franco 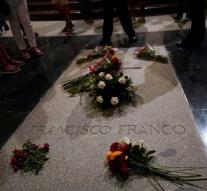 madrid - The Spanish government of Social Democratic Prime Minister Pedro Sánchez will move the remains of dictator and general Francisco Franco (1892-1975). Deputy Prime Minister Carmen Calvo has announced on Friday that a decree has been issued and that the procedure has been initiated.

The remains are located in a monumental church carved in the rocks, 43 kilometers northwest of Madrid, in a complex known as the Valle de los Caídos (Valley of the Fallen).

Franco had the church built as a monument for all the fallen from the Spanish civil war (1936-1939). Around 34,000 killed civil war fighters are buried, including Republican opponents of Franco. However, the monument is controversial because Franco himself is buried there. Moreover, some of the workers who built it in the years 1941-1959 were political prisoners.