Home / World / The Nurse of Liechtenstein under the hammer 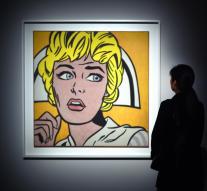 - The Nurse of Roy Lichtenstein is on 9 November at Christie's in New York under the hammer . The work is considered one of the most important American painter and is typical of the pop art movement . The auction house expects the painting converted will yield about 70 million euros.

This amount would be a record for a Lichtenstein.

The highest amount to date for one of his works was coughed up, is 49 million paid in 2013 for Woman with Flowered Hat.

Other masterpieces auctioned early November by Paul Gauguin, Giacometti , Paul Cezanne and Rene Magritte. Giacometti is auctioned the famous portrait of James Lord. The proceeds expected to be between 19 and 26 million euros.