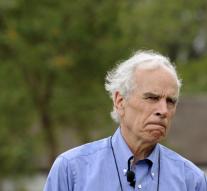 - Businessman and environmentalist Douglas Tompkins (72) is in Chile deceased after he was capsized while kayaking. The American died in hospital from hypothermia, reported the regional health service.

Tompkins was one of the founders of clothing company Esprit and was the founder of the company The North Face. He was later active as an environmentalist and bought plots of land in Chile and Argentina, which he then transformed into parks.

The activist died in the harness. He ended up in the icy water while he was kayaking with five other people. After Tompkins was removed from the water, his body temperature was in accordance with the health service only 19 degrees Celsius. He died several hours later.