Home / Tech / The Netherlands seizes next to RoboCup 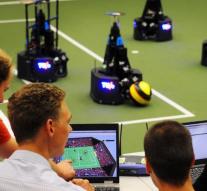 nagoya - The robot football players at Eindhoven University of Technology (TU / e) have to surrender their world title to the Chinese competitor Water from Beijing. The team grabbed Sunday in Japan Nagoya next to gold on RoboCup, the world championship for robots.

'Congratulations on Water. It was a nervous fight, we go home with silver, 'according to the Eindhovenaren. The Dutch robot team up to now has scored three times the world title and scored ten times in the final. The team has 'star players' like Robin van Perslucht, Arjen Robot and Gregory van der Tandwiel.

Team captain Lotte de Koning showed at the end that he had peace with their second place. 'We played our best match of the tournament, so we are pleased with our performance. 'The King complimented the Chinese opponent:' They defended very well and gave us no room for playing football. Their robots are also so fast, they have a dribble home that they could drive us over and over. '

RoboCup is the world championship for intelligent robots in different disciplines, with nearly 4000 participants from forty countries. Eindhoven played in the middle size league, with table-top robots playing five to five with real football. They are programmed, but as soon as the fluorescent signal sounds, they fully play independently.

The goal of the tournament is to accelerate technical developments. A dot on the horizon is that the football robots could beat the human world champion in 2050.

Debutant at the RoboCup tournament was the RoboTeam of the University of Twente. That took part in the 'small size league' and reached the fourteenth place to the satisfaction of team leader Ewoud Croll. In that part minirobots (up to 15 centimeters high) play with an orange pingpong ball on a field of 6 by 9 meters.