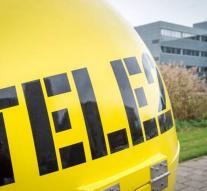 stockholm - The Swedish telecom group Tele2 has adjusted its profit forecast for the whole of 2017, partly due to the 'attracting economy' in the Netherlands. Mobile phone revenues increased by 45 percent in our country over the past six months, according to results presented on Wednesday.

Tele2 Netherlands saw the number of customers increase to almost 1.5 million, of 1.3 million a year earlier. The operating result in the Netherlands was 18 million Swedish kronor (1,9 million euro).

One year earlier, the company had to put another loss of 121 million crown into the books. Total Dutch sales increased by 2 percent, up to 149 million euros.

In the second quarter of this year, the group achieved a operating profit of 1.6 billion crown, half more than in the same period last year.