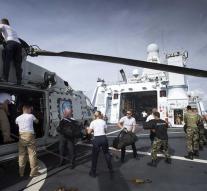 the hague - Dominica receives emergency aid from the Netherlands after Hurricane Maria. This is done at the request of the government of the 73,000 inhabitant Caribbean country. The naval ship Zr. Ms. Zeeland- previously used for Saint Maarten- offers assistance.

The navy is going to bring relief, carry out evacuations and map the damage, according to the Ministry of Defense. The ship has already arrived at Dominica, and a helicopter from Zeeland has already picked up the first injured and taken to the hospital.

Defense emphasizes that aid to poor Dominica is not at the expense of aid to Saint-Maarten that caused Hurricane Irma's injury two weeks ago. On Dominica, many hurdles are grounded by the hurricane on Monday, and there is still no power.