Home / World / 'The Netherlands has inheritance debt to Europe for Mocromaffia' 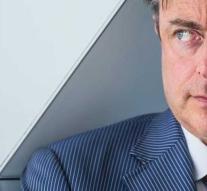 antwerp - The Netherlands has an 'inheritance debt towards Europe', because the cocaine trade and the problems surrounding it have moved from Rotterdam to Antwerp. That says the Antwerp mayor Bart de Wever.

According to the mayor, organized crime in the Netherlands has become very deeply entrenched by the Dutch tolerance policy. 'And now we share, with a port that is also very important for South America, in the blows', he says to Nieuwsuur.

Despite a 'war on drugs' that De Wever has started and which, according to him, has already yielded many results, the Antwerp mayor sees that the drug mafia is still gaining influence in his city.

Half of the cocaine in Europe comes through Antwerp. 'Five years ago it was five thousand pounds, last year forty thousand kilos- and our effort to search for drugs has not increased. The flow has really moved from Rotterdam to Antwerp. '

'Organized crime is in the Netherlands, but they are looking for accomplices here in Antwerp', concludes De Wever. That is why in a second phase the city council wants to make more work on tackling money flows from the drug environment.