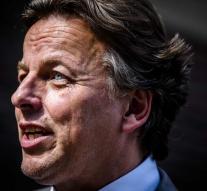 the hague - The Dutch government also 'condemned' the most recent North Korean nuclear test on Sunday.

Foreign Minister Bert Koenders calls the trial in response to other international leaders 'again a reckless provocation in a time of rising international tensions. '

According to Koenders, the regime led by Kim Jong-un must 'realize that North Korea provocations further isolate and dodge their own population,' the ministry said.

The Netherlands wants the United Nations Security Council to meet soon to take further action. Comprehensive international sanctions have been in force against North Korea for years because the country continues to continue developing and testing nuclear weapons.

In order to make progress with North Korea, proper compliance with sanctions is essential and the international community must continue to exercise 'constant pressure and diplomacy,' Koenders said.