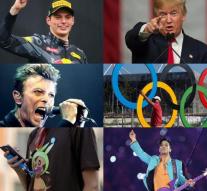 amsterdam - 2016 was an eventful year, shows once more from the new annual survey of social network Twitter. It contains the most popular trending topics, or topics on the medium most about is spoken. At one place in the Dutch trend list: Brexit.

The referendum on whether Britain should, tempers our country was still the most busy in the EU and many users also moved to using the hashtag '#nexit. However, this was not popular enough for a place in the annual list.

The rest of the list sport is doing particularly well. As the Olympic Games in Rio de Janeiro were represented by two spots on the list: # Rio2016 on place three and #TeamNL in tenth place. also held the European Championship, despite the fact that the Dutch team did not participate, counting on great interest from the twitterers: # Euro2016 can be found on the fourth place.

Also notable is the lack of a specific topic: Max Verstappen. The young Formula 1 driver has a very successful season behind us, but it is not reflected in the top ten. However, he is the subject of the busiest day on Twitter in our country: May 15th. When namely Verstappen won the Grand Prix in Barcelona, ​​after which the Dutch users were flocking online to praise him.

Also unexpected developments, such as the gain for Donald Trump was a veelbetwitterd topic worldwide. Furthermore, it was an intense year for music fans, with death include David Bowie, Prince and Leonard Cohen. It was therefore #RIP (rest in peace) regularly trending on the site. In the top ten places worldwide Twitter among other things, the Eurovision Song Contest, the Oscars, the complications in Game of Thrones, but also #BlackLivesMatter (a protest against violence against black people). And the smartphone game PokemonGo did well among Twitterers.

Finally, at number two to find a trending topic not directly ties in with the news: #vacature. Many people still seem to look through the social network for jobs. Here hooked on Twitter in the national online Job Day organized in cooperation with the UWV.\n  \n  \n   advertisement

Twitter has 317 million worldwide users who log in at least once a month. Hard Dutch user numbers are not known, but a recent study by market analyst firm Telecompaper has 22 percent of the Dutch population are the mobile app of the social network on the smartphone.