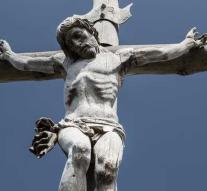 bad tolz - The dull Bavarian Prime Minister Markus Söder wants to see more crosses in public buildings. 'Getting crosses off the wall irritates me because they are not only a sign of faith but also a basic element of our human dignity. I would like people to hang up again, 'said the CSU candidate for the federal election Monday at a meeting in Bad Tölz.

For Söder, religion still means a lot, he told the roughly 300 interested parties. He would like to see some more self-awareness of the Christian churches in Germany, for example in the field of missionary work. This characteristic has fallen into the background. It is a thorn in the face of Söder that there are also many cities in Germany where Christianity is no longer an essential factor.

The Bavarian Christian Democrats have appointed Söder in December as the party leader for the election on 14 October. It is still unclear when he takes over the work of Horst Seehofer as government leader. That would happen in the first quarter of 2018. CSU insiders think that Seehofer gives a definitive answer during a board meeting on 5 March.