Home / World / The high word is out: justice wants to sue Netanyahu 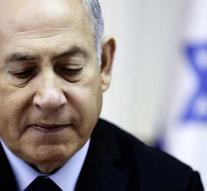 jerusalem - The Attorney General of Israel wants to prosecute Prime Minister Benjamin Netanyahu for bribery and fraud. The Likud party of the right-wing leader speaks of 'political persecution.'

Israeli media reports that Netanyahu has been formally informed of the decision of Prosecutor General Avichai Mandelblit on Thursday. That comes at a politically sensitive time. Israel goes to the polls on 9 April and Netanyahu wants to continue as prime minister.