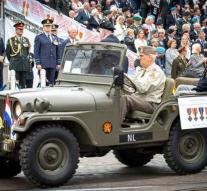 the hague - The center of The Hague is Saturday for the thirteenth time the decor for the Dutch Veterans Day. The city welcomes thousands of veterans and is expected to be 100,000 interested.

The Netherlands has more than 115,000 veterans. Mainly men, but also women, who have been deployed during numerous peace missions.

The day begins with a ceremony in the Ridderzaal at the Binnenhof in the presence of King Willem-Alexander, Prime Minister Mark Rutte and Minister of Defense Jeanine Hennis Plasschaert. During this meeting, stories of veterans are central, such as that of the first female F-16 pilot Manja and the Afghan-Dutch veteran Ahmad.

Then, early in the afternoon, the defilation takes place in front of the king in the center of The Hague. Nearly 4000 veterans, sixteen orchestras, packed horses, detective dogs and 32 military vehicles are involved. At the Malieveld a public program takes place including military vehicles, an F-16 simulator, climbing tower and obstacle course.