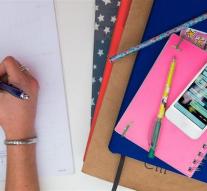 the hague - Thousands of upcoming Hague classmates who grow up in low-cost families get a smartphone with internet access. State Secretary Jetta Klijnsma (Social Affairs) handed over the phones to the first 250 children on Monday.

Without internet and mobile phones, young people miss the connection with digital society, find the initiators. The project is financed, inter alia, by the municipality of The Hague, the Ministry of Social Affairs and Employment, T-Mobile and Samsung.

All children are given explanations of sensible mobile behavior, such as the risks of sexting, traffic safety and financially responsible handling of the smartphone when issuing the phones. In order to protect them from making debt via the mobile phone, calling abroad has been blocked as well as some paid SMS services.