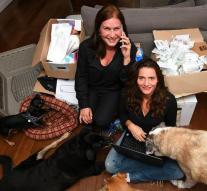 amsterdam - Feed, medicines, horse decks, emergency kits and building materials: Irma Neijman from The Hague collects necessary goods for animals on St. Maarten. 'Animal help is not the priority for many,' she says. 'I understand, but if we do not deliver these things as quickly as possible, many animals on the island will not save it.'

'Via via I came across one of the volunteers who had internet access. Before the hurricane destroyed Saint Maarten, 120 dogs were accommodated in asylum. Also, horses and cats were taken care of. Many animals are temporarily accommodated by islanders. But the food is raining and many outer rains are destroyed. '

The veterinarian who spoke to Neijman said all his vaccinations were spoiled. 'Because of the power that has fallen out. There is also a need for medications and cures against, for example, signs and worms. Everything to prevent the animals from getting sick or spreading infections. '

One of the volunteers of asylum now runs a daily routine to carry the stray dogs. 'Many animals have become homeless because they have run away or because their owners no longer have the means to take care of them. '

To all expectations, the foundation can send another cargo via Curaçao to Sint Maarten this week. Neijman: 'Because we have been hooked in a collective project for the residents, everything can be done soon. '