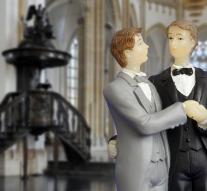 berlin - Homosexuals and lesbians in Germany can finally marry each other. The law for the opening of marriage to gays took place last Friday with the approval of the Federal Council, the last obstacle in the parliamentary process.

The German version of the First Chamber dealt with the law on Friday at the last session for the summer recess. The Bundestag had already given green light last week for the opening of marriage to people of equal sex. Homosexuals in Germany have been fighting for decades for this. Since 2001, Germany already knew the registered partnership for gays.

The debate on this issue was recently accelerated when German Chancellor Angela Merkel (CDU) surprisingly gave up the Christian-democratic view of a clear 'no'. Instead, she left the group members individually on how they wanted to vote on the issue. The other groups in the Bundestag then made rush to make a quick decision.