Home / Tech / The future is now 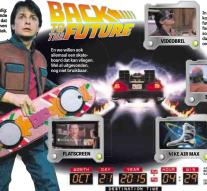 - Tomorrow is October 21, 2015 , the day when Doc Brown and Marty McFly in Back to the Future II visit the future. What has become of the predictions that the creators of this futuristic action comedy from 1989 took over us today ?

In Back to the Future II, Marty McFly (Michael J. Fox) has just returned from the past as Doc (Christopher Lloyd) drags him to the future. Once aboard his DeLorean chooses invented the time machine almost instantly airspace on the way to 2015. With the words: "Where we are going, because we do not need roads."

That is right the first miss on the yardstick of contemporary reality, because flying cars are still the future. All work companies like Aero and Mobil Terrafugia years hard on these futuristic vehicles.

The floating skateboard when Marty McFly in 2015 to a group of attackers managed to escape, has been around though. Lexus developed such 'hoverboard, but especially from a technological flexing of muscles. The preconditions to stay off the ground, namely undermine any practical applicability.

Writer / director Robert Zemeckis and screenwriter Bob Gale incidentally always have said that their future should not be taken too seriously. "We were just having fun creating and fantasized a storm," Gale emphasized time and again in interviews.

Yet suckle the two filmmakers not all their thumb. They also drew from modern developments in 1989 in a smart way into the future. In their film comes as the videophone past, a form of communication that now, thanks to programs like Skype and FaceTime has become commonplace. Flat TV screens in Back to the Future II everywhere. Furthermore, people in the film all the required information using extravagant spectacles take it to them, somewhat similar to the current Google Glass.

The incredible expansion of the internet, mobile telephony and the combination of the two would take was totally unrecognized by Gale and Zemeckis. You stumble in their future film over the telephone. E-mail is made either, in its place there is still faxed on a large scale. Even if - as in the older Marty McFly - concerns a letter of resignation.

Furthermore suggest they go there to be used in 2015 drones. Inter alia, to sit on top of the news and take pictures, such as the daily newspaper USA Today does in the film. But these flying robots like in Back to the Future II also walking the dog, is not true.

Marty McFly's future adventure not only sketched futuristic outlook, our contemporary reality was partly shaped by. Several companies were indeed with the ideas provided greater the film to get. Lexus Hoverboard thereof is not the only example.
Pepsi brings so from tomorrow in a limited edition Pepsi Perfect out, the drink which he quenches his thirst in the film. Nike also made earlier this year is known serious research into "power laces", the self-trapping laces which were provided McFly's ultramodern sneakers.
The most remarkable is perhaps that some of the predictions of the filmmakers have proven so called self-fulfilling prophecy's. For their dreams of the future have inspired other people to fulfill this fact.

Back to the Future Day

If America since January 1 counts down to Back to the Future Day. Partying in style, special cinema screenings and a series of special BTTF products will be celebrated that the future journey of Marty McFly crosses our own timeline.
Actually, the future starts so tomorrow, 4:29 PM exactly.

Science Fiction Movies offer a glimpse into the future, and sometimes hit the nail on the head. Here are five notable examples:
Metropolis (1927)

The metal femme fatale Mary Fritz Lang in Metropolis conducted a robot that was formed to humans. The development of such humanoid machines is now well advanced. For example to help in dangerous situations or as a playmate for the children.

The tablet also appears in Back to the Future II, but filmmaker Stanley Kubrick has previously shown the use of portable flat computer with a large screen in his visionary film 2001: A Space Odyssey.

In the Star trek movies has always been mobile communication, but the form it in Star Trek III: The Search for Spock assumed, proved to be a direct precursor of the folding "clamshell". True Trekkies use the distinctive sound of the 'communicator' of course as a ringtone on such a phone.

Google works hard to automatically controlled cars, vehicles also had been driving around our own Paul Verhoeven Total recall. All the Internet giant will not put such a terrifying robot behind the wheel as he did.

Tom Cruise controls the computer in Steven Spielberg's "Minority Report" with hand gestures in the air. Consoles make full use of it by now and every smartphone and tablet user knows now how you can use your little finger gestures swipe and 'zoom'.